Just prior to the Covid Pandemic I had reconnected with my old school chum Richard Hammond. As kids we met in High school. We very quickly became friends as we had a mutual love for Hip Hop Music.   We had come from two different Middle Schools and were both heavily into the music.

Although we haven’t spent much time together over the years the friendship has always been there. We bumped into each other in town. He spoke to me about something he wanted to put together. A web show where he reviewed Cigars. He acquired a love for smoking them over the years.

I asked him to do a photoshoot with me, to see how he looks on Camera. We drove over to the City and took some shots in Digbeth.   Looking at the pics I could see clearly the potential that he has on film. 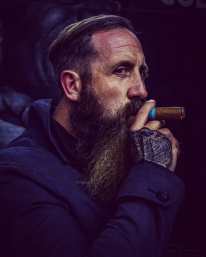 Richard is also known as Des Told me that I had to see his Cabin where he wanted to film the show. So I went and had a look. Immediately after seeing the cabin offered to film and produce a show.

We filmed a few episodes to get comfortable working together. We had to fine-tune the show and think about a format of how we were going to present it. It took about 14 episodes to where I feel I’m happy with it.

We work as a good team, and that is what it takes. Everyone involved needs to be on board and serious about how we manage our time. Hopefully, as the show grows we can branch out on our travels.

If you are interested in putting together a show and would like me to help in directing and producing get in touch. I am available to film and direct.