Recently I got to work with photographer Stuart Myers,  Many years ago when there was no digital and it was all about film photography this was a medium that I loved and studied and graduated in. As a student I would live in the Dark Room after hours developing and printing pics.

As a child my father who was also into photography and cameras  he would teach me how to use one, load film and how to manage lighting.  Over the years I have transitioned to digital photography doing my thing with it.  Sadly though over the years I’ve forgotten most of what I’ve been taught and been lucky to get some nice shots.  So meeting photographers like Lee Crawford and Stuart Myers has put a spark back into my interest in the technical side of capturing images.

Stuart has found his calling.  I knew Stuart a few years even before he took up Photography.   Lee Crawford, I new since a child.  We hung out a few times to talk bout the music and where they are at with their photography.  What I noticed was these are two people who have become engulfed by their craft.  They absolutely live it.  There spare time revolves around them reading studying and practicing their craft.  So when the opportunity is there I become good subject matter for them both.  We all love the music and they around me and really see the journey im on.

I can remember every time Stuart would come to my home he would bring not just cameras, but arms fulls of books and a wealth of knowledge he had been picking up, He invested in him self going onto courses with well known photographers, putting what he learnt it into practice.  Stuart is a very technical photographer and his personality is very direct. He knows what he wants to try and achieve looking down a lense. We had talked about it a few times and one of things I miss in todays photography is the documentary style that I grew up on, which would appear in prints such as NME, Melody Maker and publications like that in their prime.

Stuart wanting to challenge him self offered to take a day off his schedule to follow me round and take some shots. In the old days we call these field trips.

So a few weeks later we met up at my home to do this. What I would like to do is use some of the shots Stuart takes for Diceman’s next lp. Part of my vision for the label is create a books that will accompany every record. With the Power of Now a lot of the shots capture the journey of where we came from to the point where we began working together.  Our next lp, my vision to cover the present day and where we are going. Armed with a few lenses and reel film camera Stuart and I went to work. I can’t stress this enough It is so important to keep creatives in your circle. Especially good ones. Although we off the rador too many my circle is made from talented forward thinking competent creatives who are passionate about their craft. We work together to help build and develop each other, where we can, If your an artist I always like to encourage that way of living.

My life revolves going to work doing 3 shifts in a factory to help fund all this out side that all I do is work and look after my parents who have now reached an age where they are no longer independent as they would wish to be. So before even breaking out to do our work my first job was to get my mother to the hospital for her check ups.

She is something extraordinary, although she doesn’t fully understand what I do she has gone through it all with me and dealt with enough of her own troubles that in this time of life she only can wish the best for me and the close friends around me. If should had the strength or the money she would give it all so we could all be successful, but she doesn’t have that she painfully watches us all really grind trying to build a future that is at times has become about leaving a legacy. Her spirit is beautiful and more than enough, her presence gives me the strength to work hard towards our goals.

Following we drove to Birmingham to continue shooting. Starting at Birmingham Bakery Medicine. A very beautiful spot located in New Street. It was Stuarts first time here. These shots were a bit staged he was looking at angles.

After we went to the Birmingham art Gallery, I would often come here as a child firstly on a school trip but later with my older brother who was studying art and architecture when I was playing with lego. 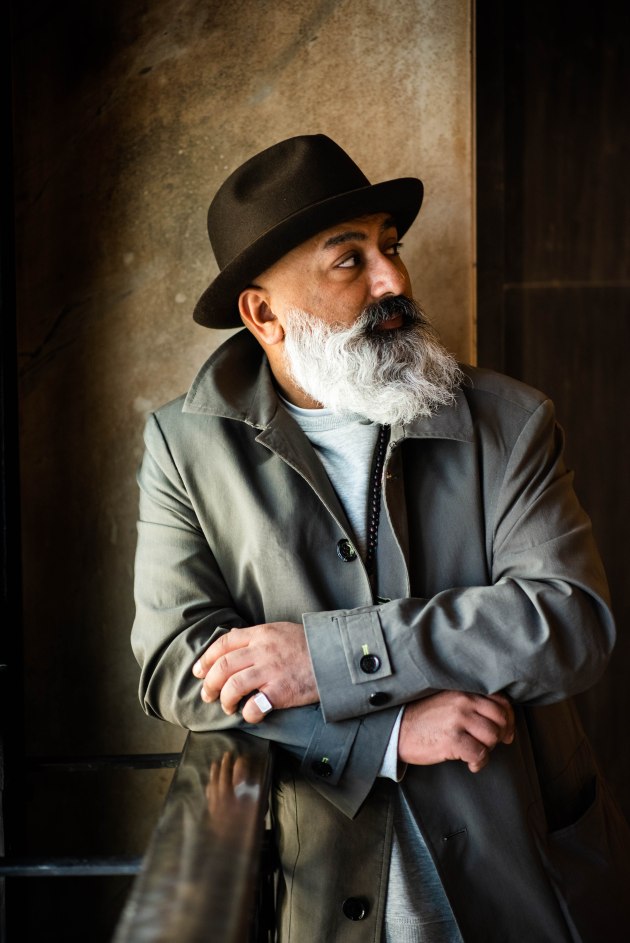 Afterwards we got some more natural shots as we went to my home for many years the Diskery, possible the oldest record store in the UK. As a child id be in here again following my older brother round but as a teenager and beyond this shop become a serious part of my life. Nothing but love respect to all the staff past and present here. Many of the samples I used have come from here. Walking over to the Diskery we got drenched by a random downpour Stuart too.

On the way home we passed through my parents home to see my father who is working on his new painting. Although growing up my father was totally against me persuing the arts he really never stopped me. I’ll never forget that. We never knew up until a few years ago he could paint as he grew up in a world where art was forbidden. As a child you was built to work. You wasn’t allowed to express your ,self the arts is not an option, and for years he brought us up the way he was brought up, privatly he resented that life and always preached freedom but could not detach him self in practice to the strict  and disciplined life he had to live.  he tried to put us through that. He carries a lot of pain and anger, painting now has changed him. His attitude towards creativity and the arts has freed him.

Stuart took the images home to work on them. A week later sending me his images. In between I did go to his home to see him at work and watch his process.

To find out more about Stuart please click here.